I’ve been playing the guitar off and on (ok, more off than on) for almost 30 years. Over those 30 years, I’ve listened to a lot of guitarists, both good and bad, and I thought I’d share with you some of the ones that have influenced me

The Reverend Willy G (he’s an actual ordained minister) has always been a big influence on me. His lazy Texas blues style coupled with an amazingly cool look in many ways is the picture of what a guitarist should be.

His playing, though, isn’t that simple to mimic. A lot of double-stops and harmonics, and he makes sure to leave some space for Dusty and Frank to be heard. His solo on La Grange is one of my all-time favorite solos. In my post “Guitars as wands” I mentioned that I name my guitars. The guitar that I just got, a nice Honey Burst Les Paul I named Gibbons. I’ve always wanted a replica of Billy’s Pearly Gates Les Paul, but since used they got for $20k, this is as close as I’m going to get.

What a terrible, terrible tragedy his death in 1990 was. I remember where I was when I heard the news. I was on Rt 16 on the Natick/Wellesley border on my way to band practice. Needless to say, that days rehearsal was full of Stevie Ray.

Stevie was my Hendrix. Again, another Texan, but this guitarist had fire. He played like he knew his time on Earth was limited, and sadly it was. The helicopter carrying him from a gig crashed into a hill.

Whenever I pick up a Stratocaster, Pride and Joy is one of the first songs I play on it. I have few regrets in life, but not going to see the tour he did with Jeff Beck is one of them. 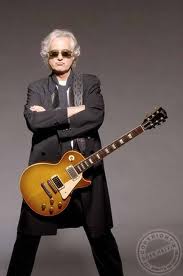 James Patrick Page, another Les Paul weilder, is the poster-boy for a guitarist that sold his soul to the devil. In fact, his interest in the occult, coupled with a massive heroin addiction, were blamed for some of the events that lead to Zeppelin’s downfall (Notably, the death of Robert Plant’s son Karac was seen as a price the band paid).

Jimmy got his start as an in-demand studio session, and Led Zeppelin were probably one of the first super-groups in history. Page knew exactly the sound and look he wanted from his bad. That vision made him rich.

What’s funny is, Page in many ways solidified the  image of a Les Paul and Marshalls, but for the first album he used a Telecaster and a Vox amp. On the 3rd US tour, Page was using Hiwatt amps.

What Page did, was show to sound big, you needed to start small. He recorded the first Zeppelin album with a small amp, cranked, and used distance miking to capture the huge sound.

And, man, playing Page’s stuff is hard.  His riffs are intricate, and are also often mimicked my John Paul Jone’s bass.

I’ve often described Steve’s playing as someone who gives a speech using the biggest words and most complex vocabulary he can. Or more like a fantastic bottle of fine wine. However, songs like Giant Balls of Gold show Steve is capable of writing some damn catchy hooks.

Steve’s playing is so technical, and so many effects go into his sound, he’s almost like the Darth Vader of guitarists: it’s hard to tell where the man stops and the machine begins. Back in the day I was so obsessed with his sound ,I seriously contemplated getting an Eventide Harmonizer to try and get the sounds he used on Passion and Warfare.

His signature Ibanez Jem guitar is one of the few signature guitars I’d like to own. I do have an Ibazed RG570 that has the same body as the Jems (without the monkey grip handle, though) and I recently had it renovated and his signature Gravity Storm pickups put in it. That’s about as close as I’ll get. 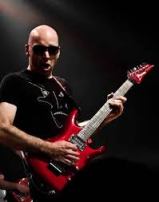 If Vai is like a fine wine, Satch is like a good craft beer. Satriani is Vai’s former guitar teacher, and I can’t help but think those were some fun lessons.

I’ve always thought Satch’s playing was much more more lyrical than Vai’s. I’m not saying Vai is a passionateness player, but Satch just seems more so. His song, Flying in a Blue Dream, is one of my favorite songs of all time.

As amazing as his solo career has been, I really think he his stride when he formed Chickenfoot with Sammy Hagar and Michael Anthony. Go ahead and watch this Chickenfoot cover of Highway Star. I’ll wait. 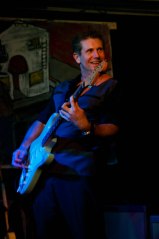 A couple years ago, I walked into a small club in Taunton and had my life changed. Neal was playing, and for the next three hours, he made that guitar his bitch.

Virtuosity is often over-used, but in Neal’s case, he’s one of the finest guitar players I’ve ever seen, large stage or small. I’ve seen him countless times over the years, and its getting near time for my “Neal fix” Seeing Neal that first time, I could imagine what it was like walking into a club and seeing Stevie Ray play.

The best part, of all the guitarists I’ve listed, Neal is the only one I’ve taken lessons from. I took lessons from him for over a year, and can still his voice guiding me as I play.

A long-time Mac user, Mark has been writing about technology in some form for over ten years. Mark enjoys his Kool-Aid shaken, not stirred. He also believes the "it just works" slogan from the ads should have an asterisk: except when it refuses to. You can follow him on Twitter at twitter.com/crumpy. His personal site is www.markcrump.com View all posts by Mark Crump